One of the joys of researching a topic in depth are the little gems of knowledge you often uncover. Several years back I camp upon a reference to a manuscript that was translated by Herbert Giles. One of the reasons this caught my eye was the name of Herbert Giles. He was one of the men responsible for developing the Romanization of Chinese (Wade-Giles).

Then there was the title, “Instructions to the Corner” or “Records of the Washing Away of Unjust Imputations”. With a Masters degree in Criminology I began to wonder what type of forensic information might be discussed in an old Chinese manuscript. The “Hisng Yuan Lu” dates from the reign of Shun Yu (1241 – 1253) and was written by Sung Tzhu. Giles first came across this work while stationed at Ningpo in 1873 and subsequently translated this text. It was then published in the “China Review” in 1874 and later republished in the “Proceedings of the Royal Society of Medicine” in 1924. Once I acquired a copy of the translation I quickly scanned the text and to my pleasure there were two charts showing vital points! Not here indeed was something to look at. A text that dated from the mid 1200’s, translated into English in 1874 that clearly addressed vital points. This may be the earliest text in the English language that mentions vital points. Consider, the “Hisng Yuan Lu” made available to us information on vital points forty eight years prior to the introduction of Karate into Japan by Gichin Funakoshi in 1922. Also, remember there are a number of books published in the early 1900’s that clearly discuss and demonstrate the use of vital point techniques.

In addition there are thirty six non vital spots listed on the front of the body and an additional twenty listed on the back. While this was an early work there are records of other books that have been lost describing the injuries that could be caused on another person by a trained fighter. They are: “I Yu Chi” (Records of doubtful Criminal cases) written in the 10th century by Ho Ning and Ho Meng and the “Ming Yuan Shih Lu” (True Records of the Clarification of Wrongs) by Hsu Chih Tshai in the 6th century. Consider that the Shaolin monastery goes back t the 5th century, one could then make a very tenuous assumption that Ho Ning, Ho Meng, and Hsu Chi Tshai could have had knowledge of the damage that trained individuals could inflict on another person without the use of weapons. In China there were two main sources for knowledge in the martial arts. The Shaolin temple is the one most people will immediately associate with the fighting arts of China due to the television series “Kung-Fu”. However there was another temple, Wudang, which followed the Taoist tradition. This temple has gained fame with the general public from the movie “Crouching Tiger, Hidden Dragon”.

Because of its age the “Hisng Yuan Lu” may be one of the oldest books on forensic medicine ever written. This book was carried by the high territorial official who had the duty to coroner whenever they had to investigate a death. It is interesting to note that inquests were also held on the living if there were sustained as a dangerous wound. This was done to establish a “death limit”. According to the “Hisng Yuan Lu” the wounded man in a brawl would be handed over to the accused to be nursed back to health. If the victim died as a result of the injuries suffered in the fight the aggressor would be subject to a death penalty.

The author of the “Hisng Yuan Lu” recognized two classes of vital points, those that could be fatal on impact and those that could produce death at a later date. The text notes that if a mortal wound is given to the top of the head, behind the ear, the throat, the pit of the stomach death can take place quickly. Or, death can result in three days if a vital point located at the back of the head, the forehead, or the chest is struck. Then there are the “ordinary” vital points when struck death can follow in as much as 10 days. From a practical point of view the vital points that result in immediate death would have been of the most interest to the warriors of those days, and even to the current day martial artist. In practical terms of self-defense you would want to have an immediate reaction from strikes to vital points, rather than delayed effects. There may be some advantage to strike a person and have them die ten days hence - could allow an individual to escape notice as being the perpetrator of a fatality.

It is interesting to read that wounds which resulted in the death from blows are delivered by the hands to the upper part of the body, the back, and chest, upper ribs and rarely on the lower ribs. Kicks would have been delivered in the pit of the stomach, and the ribs. The author of this text felt that blows to the head, face, chest, breast, etc. would have been considered mortal. They noted that if a blow resulted in the death of an individual at a later date they should look for somewhat larger bruising and inflammation. If the blow results in immediate death there would be deeper and more sever bruising of the individual.

This may be where some of the lore on the delayed death touch could have first surfaced. From a purely western point of view it is possible to understand how death could occur at a time later than the original altercation. For example if your rupture the spleen or liver you would not be able to survive unless you were taken to the hospital and surgery performed. At the very least sever infection could occur that could cause death. So it seems that the Corners of China were well aware of the use of vital points and how they could result in the death of an individual either at the time of the assault or at a later date.

Reproduced with the permission of the author.

From the beginning of his training in the martial arts Prof. Clark has been exposed to the concept of cross training. In the early days most of the martial arts to be found in the U.S. was Judo. Karate, Tae Kwon Do, and Aikido were practiced in the U.S. but tended to be in the larger cities or perhaps in military bases. At that time martial arts schools were not as numerous as they are today. So when a visitor would come to the Dojo they would be welcomed and asked to participate in the class, and even teach some of their favorite techniques. They would even offer what they could in a short period of time if they practices a different martial art.

This cross fertilization of martial arts offered the genesis of the current system taught by Prof. Clark. Over the years Prof. Clark has had the opportunity to train with a number of instructors who have felt he had the skill and understanding to be ranked in their system. In the past this has led to some confusion with his students because they would question the origin of a particular technique. The late Grand Master Remy Presas (founder of Modern Arnis) offered the advice to Prof. Clark that he should form his own association and name the system of techniques he taught. While this was sound advice, Prof. Clark was reluctant to venture out and name a style of martial arts that he was teaching. However, it became increasingly difficult to separate the individual arts from the blended style he was teaching and after further suggestion by Grand Master Remy Presas and from his students Prof. Clark adopted the name Ao Denkou Jitsu for the style he was teaching and Ao Denkou Kai for the organization. Visit the website: http://www.ao-denkou-kai.org/

Ao Denkou roughly translates as "blue lightning", the lighting is for the "zing" of electricity you feel when a pressure point is struck or manipulated. "Ao" or blue is in respect to Chung Do Kwan (Blue Wave) from which Prof. Clark studied from 1966 under Chung Nak Young.

Ranks Prof. Clark has been awarded are: 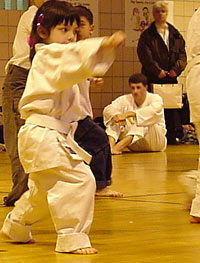 Combat Obesity in Children with Martial Arts
Getting Started
Childhood obesity is a worrying trend that needs to be addressed as urgently as possible. Overweight children not only suffer from all kinds of health problems, they are invariably the targets of bull...
Read More 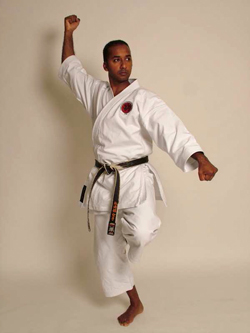 Kata Combat - Duality of Theme
Kata and Forms
By Rakesh Patel Every Kata can be viewed from two perspectives: Kata for effective combat and Kata for competence. Kata Combat is primarily concerned with the effective application of the techniques a...
Read More
Janus
Personal Blogs
Sometimes people tell me that I am a person of contradiction being a martial artist and self defence instructor as well as an IT professional. I don’t see the big contrast as to me both martial arts a...
Read More