It is that time of the year when we start thinking about our kung fu or martial arts gradings and whether we are able to sit them or not. Are we ready? Do we know all the elements we need to know?

Each of our grading level manuals has a section on gradings explaining what we need to know and also listing minimum requirements before being able to sit for the next grading. Does this mean once we have completed the “time” does it automatically enable us to sit the exam ???

I am planning to sit for my kung fu 5th level in the upcoming gradings and started to reflect on what it means to grade, why we do it and some of the misconceptions.

“A good traveller has no fixed plan, and is not intent on arriving” - Lao Tzu (chinese Taoist philosopher)

Traditionally the Chinese arts of kung fu had no formal belt ranking system. The “black belt” as we know it was a result of wear and tear. In ancient times, a student in training would wear a white belt. Over the course of months to years this white belt would become dirty and increasingly dark. By the time a beginner had mastered his art, his once pristine white belt would be black. Hence the black belt was reserved as a mark of a long time student in honour of this tradition.

The first modern belt ranking system was introduced in the sport of Judo by its founder Jigoro Kano in the 1880s. It was initially just a white and a black belt only however in the early 1900s this expanded to a coloured belt ranking system. This was then adopted by Gichin Funaskoshi (considered father of modern karate) as karate spread from Okinawa to Japan.

This system of ranking then spread to other martial arts with clubs using coloured belts or in our case at Golden Lion – the sash with stripes and tassels. This concept of ranking with belts/stripes has now been adopted as “standards of operating procedure” at most martial art schools.

It is important to remember that rank and belts are not equivalent between different styles. The different belt colour or number of stripes does provide a focal point for the newer student as they have someone to ask or copy if they are uncertain of a particular technique, application, etc.

Unfortunately the grading system has been somewhat “commercialised” by some schools – and can be used as a marketing gimmick – eg “join this club with a guarantee of reaching a black-belt in 1-2 yrs”. This is probably more of a problem in other parts of the world rather than in Australia with the appearance of the so called “McDojo” (ie McDonald like) schools popping up on every corner. This can promote the so called “Black Belt Obsession.”

“If the only reason you want to do martial arts is to get a black belt to show off to your friends then save yourself (and your teacher) the time and trouble and just go and buy one. Because if that is your only focus you are going to miss the real value behind the art”.

When most people think about martial arts they associate it with fighting or self defence. In part this is somewhat true – martial arts is about training oneself to defend him or herself but this physical training is really only one part of the equation. There is much more that can be obtained – personal growth and development, learning to stay calm and centred both in our classes but also in the “outside world” and much more...

It is important to remember that the transition from first grade, to second grade, etc has less to do with the techniques than with learning the methodology and procedures to think like a martial artist. “How long should it take — as long as it takes, no longer and rarely sooner.”

Embarking on the path of kung fu is about embarking on a journey. Different martial arts have different paths but all lead to the same goal.

There are minimum requirements which need to be met before presenting for the next grading, these are in our manuals and also on the wall in class. It is important to realise that no two people follow exactly the same path and there will be different obstacles to overcome. Certain parts of the path may be longer for some than others. Even though we may have done the required number of classes we need to be confident within ourself that we know the various elements for that level. I think perhaps the most important factor is simply asking Si Gung or SiFu for their opinion on our suitability to grade.

The gaining of each stripe on our sash is simply an indicator that you have proven yourself ready to learn new material. It focuses on the journey and not the “end goal”. Then once you have achieved a black belt – you become an advanced beginner. The belt signifies his passage from the ranks of those who are still learning to the ranks of those who’ve learned how to learn.

“Savouring the journey is often the prize, success is a journey not a destination.”

Good luck in your upcoming gradings !

Thanks to Paul Ah-Tye, Kung Fu student Rowville, for this contribution.

Synchronicity
Training and Technique
Sunday FEURNZ Holiday over, feel energised and positive.  Just three plus Marcus this week. Started with usual drills, added new twists. I got to have a play with the pocket stick – Ben and...
Read More 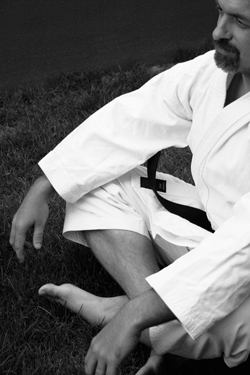 How to get the most from your Training with Meditation!
Training and Technique
By Steve Gib It doesn't matter if you practice kyokushin karate or taekwondo, a fact that remains with proper execution of reality based self defense techniques remains in the ability to stay focused ...
Read More