Indomitable Mind Body Combat Academy has now been operational for a year in Rotorua. I have seen students come and go, some have stayed and others dropped out for one reason or another. As my school’s reputation has grown through promotions, seminar work and student gradings I have had members from other Krav Maga associations contact me wanting to train with me. I have also had people from other schools and styles approach me wanting to try Krav Maga.

After I graded a batch of students in September one individual who trained with me on a few occasions approached me asking whether I would grade him. According to my log book he had not trained with me for over a month and his attendance record was inconsistent. I told him that if he continues training regularly for the next three months I will grade him if I feel he is ready. The point I am getting at is that the IKI certificate has a cost and I don’t mean the grading fees. The currency that I am talking about is time, dedication, commitment and overcoming your own fears. The certificate is there for anyone willing to pay the price; if not then they will simply be window shoppers.

I worked hard to be where I currently am in martial arts. Some people talk about grading in Krav Maga as if the achievements were beyond them. I say just give me two days a week for the next few months, some dedication and a bit of discomfort and you should make the grade. The man who asked me about the grading wanted the grade, but not that much. He went away and I have only seen him back a couple of times. Like most people he wanted something for nothing. What he failed to understand is that the certificate would mean nothing on its own; the real goal is the journey and the character that develops through the practice of Krav Maga.

I have seen people who could not combine techniques, now fluidly applying retzev. I see people safely break falling and transitioning to ground fighting. I see people instinctively applying choke defences, 360 and inside defence with counters and takedowns. Nothing makes me feel more satisfied as an instructor to see ability, understanding and competency in people who had come to me as complete novices. Sun Tzu said that before you wage war you should first count the cost. To be a capable and competent martial artist you must count the cost and make sure that you are ready to handle the outcome.

Training the basics
Martial Arts
One of the main challenges around training is know when to do what for how long. Please understand that martial arts is a time expensive activity and because of that people like me who have chosen to ...
Read More 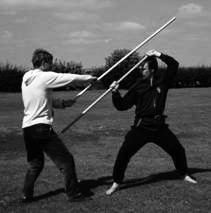 Stav
Styles
Stav (pronounced st-arv) has been described as European Tai Chi and Viking Kung Fu. Stav is a traditional system maintained by the Norwegian family Hafskjold for over 44 generations. It is designed to...
Read More
Neighbourhood Broach
Personal Blogs
The name Trayvon echoes around social networking, the world’s media and on the streets of New Zealand. As a martial artist and former bouncer I think is a sad state of affairs when a 28-year-old secur...
Read More