Muay Thai (Thai Boxing) is a form of hard martial art practiced in large parts of the world, including Thailand and other Southeast Asian countries.

The art is similar to others in Southeast Asia such as: pradal serey in Cambodia, lethwei in Myanmar, tomoi in Malaysia, and Lao boxing in Laos. Muay Thai has a long history in Thailand and is the country's national sport. Traditional Muay Thai practiced today varies significantly from the ancient art muay boran and uses kicks and punches in a ring with gloves similar to those used in Western boxing.

Muay Thai is referred to as "The Art of the Eight Limbs", as the hands, shins, elbows, and knees are all used extensively in this art. A practitioner of Muay Thai ("nak muay") thus has the ability to execute strikes using eight "points of contact," as opposed to "two points" (fists) in Western boxing and "four points" (fists, feet) used in the primarily sport-oriented forms of martial arts.

In its original form, Muay Thai consisted of an arsenal of nine weapons - the head, fists, elbows, knees and feet - known collectively as na-wa arwud. However in modern Muay Thai, both amateur and professional, headbutting an opponent is no longer allowed.

To strike and bind the opponent for both offensive and defensive purposes, small amounts of stand-up grappling are used: the clinch. Formal Muay Thai techniques are divided into two groups: Mae Mai or major techniques and Luk Mai or minor techniques. Muay Thai is often a fighting art of attrition, where opponents exchange blows with one another. This is certainly the case with traditional stylists in Thailand, but is a less popular form of fighting in the contemporary world fighting circuit.

Sport Muay Thai consists of fights of 5 rounds, 3 minutes each. The scoring is a "ten-point must" system, the same as in Western boxing and kickboxing. Punches and elbow strikes may be delivered anywhere above the waist. Kicks and knees may be delivered to any part of the body but the groin. Throws are not allowed.

Clinching is very common in sport Muay Thai. Muay Thai teaches several different kinds of clinch, but by far the most commonly used has a fighter put both hands, one over the other, on the back of the opponent's head. From this position, a fighter may pull downwards to deliver knee strikes to the face or upper torso, or control the opponent's movements from side-to-side and create openings for other techniques. Strikes to the back of the head/neck are illegal.

Round kicks in Muay Thai are delivered with the shins, which is thought to inflict more pain upon the opponent than landing with the foot, as well as protecting the kicker from injuring the ankle or small bones of the foot. Jumping and flying knee strikes are also used extensively. A foot jab , or teep, is used which is similar to the front kick found in other martial arts.

Note: when Muay Thai fighters compete against fighters of other styles (and if the rules permit it), they almost invariably emphasize elbow (sok) and knee (kao) techniques to gain a distinct advantage in fighting.

With the success of Muay Thai in mixed martial arts fighting, it has become the de facto martial art of choice for competitive stand-up fighters. As a result, it has evolved and incorporated much more powerful hand striking techniques used in western style boxing and the Thai style of exchanging blow for blow is no longer favorable.

Starting in the 1990s, Muay Thai has enjoyed a boost in popularity worldwide as it has been very effective in mixed martial arts training and competition. MMA artists such as Mauricio "Shogun" Rua, Wanderlei Silva, and Anderson Silva have combined many striking elements of Muay Thai with grappling, wrestling and Brazilian Jiu-Jitsu into a hybrid synthesis that has been highly effective in their fights. Other fighters that have used Muay Thai as their primary style in mixed martial arts include Duane Ludwig, Gina Carano, Thiago Alves, Rob McCullough, Melvin Manhoef, and Gilbert Yvel. Shoot-fighters and professional wrestlers who have trained and been influenced by Muay Thai include Satoru Sayama and Yoshiaki Fujiwara. 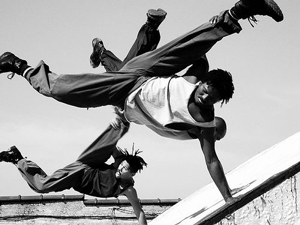 Capoeira
Styles
Capoeira (pronounced Capo-wa-ra), is an Afro-Brazilian art form that ritualizes movement from martial arts, games, and dance. It was brought to Brazil from Angola some time after the 16th century in t...
Read More

Reflections on Building a Dojo
General Interest
By Daniel Linden Sensei The circumstances of a martial artists life are often fluid. I know I certainly floated around long enough; going from job to job; town to town, and always looking for that rig...
Read More
Street Survival
Personal Blogs
I have always found it amusing how many Polynesians would walk around Rotorua wearing a shirt that is unbuttoned at the bottom. Like Mexicans in East L.A so they could quickly draw a handgun without r...
Read More