There are two varieties of foil in use today: the "dry", or nonelectric, foil; and the electrically scored foil. The components common to both varieties are the pommel, grip, guard, thumb pad, and blade. The nonelectric foil has a real tip with a blunted end that is capped with a plastic or rubber knob.

The electric foil also contains a socket underneath the guard that connects to the scoring apparatus via the body cord and a wire that runs down a channel cut into the top of the blade. The tip of the electric foil terminates in a button assembly that generally consists of a barrel, plunger, spring, and retaining screws. The circuit is a "normally closed" one, meaning that at rest there is always a complete power circuit. Depressing the tip breaks this circuit, and the scoring apparatus illuminates an appropriate light: white for hits not on the valid target area, or either red or green representing hits on the valid target area.

The pommel, a type of threaded fastener used to fasten blade, guard, plug, and grip assemblies together, is specific to the type of grip that is used. There are two types of grips used for foils: straight grips with long, external pommels, comprising the French, Italian, and Spanish varieties, and orthopedic, or pistol grips, which are designed to fix the hand in a specific position and have pommels that fit into a countersink in the back of the grip. Electric foil plugs are fixed so that the body cord plugs into the weapon along the inside of the wrist. There are two varieties in use today: the two-prong variety which has unequal diameter prongs and is held in place by a retaining clip, and the single-prong Bayonette which twist-locks into place. Foil guards are limited to a diameter of 9.5 to 12 cm in international competition.

Foil blades are made of tempered and annealed, low-carbon steel and are designed to bend upon striking an opponent in order to both prevent injuries and breakage of the blade. For international competition maraging steel is required, which is designed to break so that the incidence of potentially dangerous spikes and burrs is reduced. The foil blade is no more than 90 cm in length with a blunted (or foiled) tip. The overall weight of the full assembled weapon is at most 500 g, and the maximum length of the assembled weapon is 110 cm.

The blade itself is subdivided into 3 regions: the foible, or weak, at the last third of the blade near the tip, the medium, and the forte, or strong, is the third of the blade near the guard. Inside of the grip is the tang which is threaded at the end to allow the pommel to fasten the foil assembly together. Where an Italian grip is used a ricosso extends from under the guard, inside of the grip's quillons, into the tang.

The modern epee typically has a blade which measures 90 centimetres, and weighs up to 770 grams, although it sometimes weighs as little as 150 grams due to various metals and construction techniques. Only hits, or "touches", made with the push-button tip of the weapon are registered. The epee has a three sided blade, in contrast to the foil and sabre, which have four and two sides respectively. In competitions a valid epee touch is scored if a fencer depresses their tip with 750g of pressure. Since the hand is a valid target, the bellguard is much larger than that of the foil and is most often made of aluminum or stainless steel. The tip is wired to a connector in the bellguard, then to an electronic scoring device or "box". The bellguard, blade, and handle of the epee are all grounded to the scoring box to prevent hits to the weapon from registering as touches.

In the channel (fuller) formed by the V-shaped blade, there are two thin wires leading from the far end of the blade to a connector in the bellguard. These wires are held in place with a strong glue that protects them from the rigors of an encounter. The amount of glue is kept to a minimum as in the unlikely (but possible) case that a fencer manages a touch in that glue, the touch would be registered on the electrical equipment, as the glue and blade are not earthed. But in the event of point to point and point to glue hits, a point should not be awarded. A "body wire" with a three-pronged plug at each end is placed underneath the fencer's clothing and attached to the connector in the bellguard, then to a wire leading to the scoring box. The scoring box signals with lights (one for each fencer) and a tone each time the tip is depressed.

The tip of an epee comprises several parts including: the mushroom-shaped movable tip; its housing or "barrel" which is threaded to the blade; a contact spring; and a return spring. The tips are generally held in place by two small grub screws, which thread into the sides of the tip through elongated openings on either side of the barrel. The screws hold the tip within the barrel but are allowed to travel freely in the openings. While this is the most common system, screwless variations do exist. The return spring must allow the tip to support a weight of 750 grams without registering a touch. Finally, an epee tip must allow a shim of 1.5 mm to be inserted between the tip and the barrel, and when a 0.5 mm shim is inserted and the tip depressed, it should not register a touch. The contact spring is threaded in or out of the tip to adjust for this distance. These specifications are tested at the start of large competitions. During competitions, fencers are required to have a minimum of two weapons and two body wires in case of failure or breakage.

The epee is the heaviest of the three fencing weapons (approaching the weight of an actual court sword). However, ultra-lightweight blades can actually reduce the weight of an epee to below that of a foil. On low-end weapons, the epee has a relatively stiff blade, though new technology has resulted in a flexible blade comparable to the other weapons.

The epee is characterized by a V-shaped or approximately triangular cross-section , and a large round guard which offers much more protection to the hand than the foil guard.

The cross-section of the sabre blade is Y- or V-shaped, unlike the quadrangular shape of the foil, but not as stiff as the epee. Adult (Size 5) blades are 88 cm (35 inches) in length. At the end of the blade, the point is folded over itself to form a "button", although no actual button exists. The bell guard of the sword is curved around the handle, giving the fencer hand protection. On electrical sabres, a socket for the body wire is found underneath the bell guard. A fastener known as a pommel is attached to the end of the sword to keep the bell guard and handle on. The handle of a sabre is standardly a French grip, as most other grips are incompatible with the bell guard. The entire weapon is generally 105 cm (41 inches) long, and 500 grams (1.1 lb) in weight. It is shorter than the foil or epee, and lighter than the epee, making it easier to move swiftly and incisively. Many equate the sabre's blade to a matchstick, in that they are easy to snap but relatively cheap to replace.

Unlike the other two fencing weapons, there is very little difference between an electric sabre and a steam or dry (non-electric) one. The blade itself is the same in steam and electric sabres, as there is no need for a blade wire or pressure-sensitive tip in an electric sabre. An electric sabre has a socket, which is generally a 2-prong or bayonet Foil socket with the two contacts shorted together. Early electric sabres were equipped with a capteur socket. The capteur was a device that was intended to detect a parry by use of an accelerometer. If a parry was detected, the electronics were supposed to invalidate any subsequent closing of the scoring circuit due to the flexible blade whipping around the parry. This device never worked as intended and was quickly discarded, and the whipover effect was greatly mitigated when the FIE mandated stiffer sabre blades in the S2000 specification. The electric sabre also has insulation on the pommel and on the inside of the guard to prevent an electrical connection between the sabre and the lame. This is undesirable because it effectively extends the lamé onto the sabre, causing any blade contact to be registered as a valid touch. 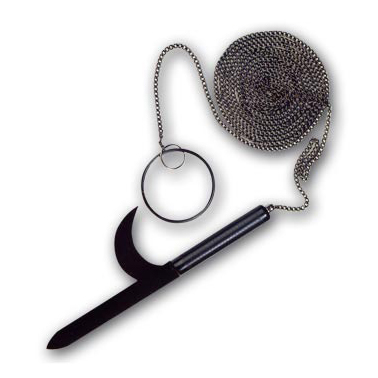 Kyoketsu Shoge
Weapons
The Kyoketsu Shoge, which means “to run about in the fields and mountains”, is a double edged blade, with another blade attached at 90 degrees to it. This is attached to roughly 18 feet of rope, chain...
Read More
Fighting Style
Personal Blogs
Teaching children’s martial arts class today I had one youngster ask me whether I had hurt anyone in sparring or in competition. Two instances that spring to mind are when my axe kick popped my oppone...
Read More

Naginata
Weapons
The naginata is a weapon made from 1.8m to 2.8m of hard wood, at the end of which is a blade about 30cm long and as sharp as a sword. In some cases, the blade could be from 60cm to over 90cm long. The...
Read More