With the ever-increasing incidence of lifestyle diseases like cardio-vascular and nervous system disorders, the time has come for us to address this ourselves, fair and square WITHOUT external dependence.

Did you know that reprogramming your natural breathing technique would not only help in preventing these problems but also help in the “reversal” of several such harmful conditions? Yes, it’s not only possible but proven too. In fact leading cardiac experts are advocating the benefits of “correct” breathing to their patients.

Whenever I teach a “Breathing in the Martial Arts” seminar I always have the students breathe in and out through the nose. This often brings quizzical looks and invariably, at the end of the session, the first question asked is; “Why are we breathing in and out through the nose?” This is a valid question and I’d like to address it here. Before I do that, I need to explain a little bit about Ki energy and how it relates to breathing.

Most martial arts practitioners have some idea about the concept of Ki energy. Ki refers to the natural energy of the Universe, which permeates everything. All matter, from the smallest atoms and molecules to the largest planets and stars, is made up of this energy.  It is the vital force of life. It is the source of every existing thing. Ki has many manifestations. Different philosophies and cultures call it by different names. Metaphysical science calls it “vital force.” Friedrich Mesmer called it “animal magnetism.” The Indian and Hindu yogis call it “Prana.” To the Kung Fu and Tai Chi practitioners of China it is known as “Chi.” Western science defines it as “biorhythm,” and New Age thinkers simply call it “cosmic energy.” Naturally, in each manifestation the Ki is viewed and defined differently, but basically it is the same thing. It is the power which enables us to think, move, breathe, and live – the power that makes gravity act like gravity.

It is what makes electricity electric. It is the link between our perception of the inner and outer worlds. It is our connection to the very flow of the universe and the prime moving force within the human body. Ki is not breath, it is the power that makes it possible for us to breathe. Ki is not simply “energy,” it is what gives energy the power to be energy. Ki is the power behind movement and thought…and it is everywhere. It is in the oxygen we breathe and the blood that flows through us.

It is difficult to define Ki concretely. It cannot be seen or measured, it cannot be touched or captured. It is everywhere yet we have no way to touch it, make it tangible, or even prove its existence. Therefore Ki is a difficult concept to accept. The Western mind likes the tangible, the concrete and the specific. It likes a scientific explanation which defines, dissects, and categorizes. Ki transcends this kind of explanation. It doesn’t fit easily into a strict biomedical framework. It is simply indefinable in those terms.

Ki within the body is like power in a rechargeable battery. Occasionally it needs to be replenished. The Ki of the universe is inexhaustible, yet the body needs fresh Ki to maintain its vitality. When you are exchanging the Ki within you with the Ki of the universe, you feel healthy and vigorous. By energizing the body with Ki it is revitalized naturally, enabling it to fight off illness and maintain good health. The true secret to replenishing Ki resides in our breathing.

Breathing in and out through the nose is the only method that enables the body to process Ki energy effectively. Most people understand the importance of breathing in through the nose. The nose has a series of defense mechanisms that prevent impurities and extremely cold air from entering the body. These were detailed in my previous article “Breathing Training for Martial Artists” (SKM Issue 72). Breathing out through the nose requires a deeper understanding of the nature of Ki energy. Practitioners of martial arts, especially karate, need to absorb and process the Ki that they are breathing in order to generate the power and force for the techniques they practice. They also need to be able to retain the Ki within the body until the moment it is needed. Basically, when we inhale we are bringing fresh oxygen and Ki into our body. When we exhale through the mouth we are expelling carbon dioxide which contains all the toxins and poisons that have built up within the lungs. We are also expelling Ki from the body. But if we are continuously expelling the Ki we never give it a chance build up into the rich source of energy needed to complete our techniques to their maximum effectiveness. By exhaling through the mouth the Ki energy is simply dissipated back into the world. Breathing out through the nose, however, completes a closed circuit. By exhaling through the nose, the Ki energy, instead of being expelled with the carbon dioxide, is transferred to the dan tien or hara, located about three finger widths below the umbilicus. With each breath in, more Ki enters the body and circles down to the dan tien growing stronger and stronger. During this breathing process, the tongue is up, touching the top palate of the mouth just behind the front teeth and the air is expelled from the nose with a slightly audible hiss. There is also a feeling of the abdominal walls contracting down with the exhalation. 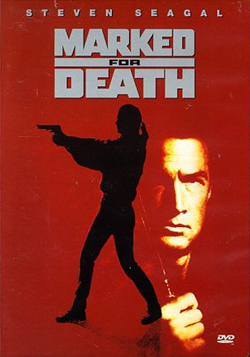 Marked For Death
Movies
1991 Starring: Steven Seagal, Basil Wallace Chicago DEA agent John Hatcher has just returned from Colombia, where his partner was killed in the line of duty by a drug dealer who has since been taken d...
Read More

Karate Uniforms
General Interest
By Rob Redmond, www.24fightingchickens.com Every sport has a uniform. Despite the fact that neighborhood games spring up with everyone wearing street clothes, our society has a habit of putting athlet...
Read More