The following article is part of a series of articles that focus on the practical application of sport psychology skills to martial arts training.  For a more in-depth look at the research upon which this article is based, please read: Performance Enhancement in the Martial Arts: A Review

One concept that I will revisit frequently in these articles is the importance of our cognitions, or thought process, to performance.  The thought process can make or break an athlete no matter how capable he or she is physically.  This article will focus on the perfectionistic thinking style and how it affects performance.  Our culture tends to cultivate perfectionistic thinking. This, in itself, isn’t necessarily a bad thing.  It depends on the specific nature of the self-talk.

Researchers make a distinction between a perfectionistic demand and a perfectionistic desire.  The difference between these two concepts is not in the behavior but in the thinking; in particular, the thinking regarding negative outcomes.  For instance, two individuals could have high expectations of success and attempt to achieve a task as perfectly as possible.  However, the individual with the perfectionistic demand would feel like a failure.  He or she would mentally berate himself and feel incompetent and worthless.  Whereas, the individual with the perfectionistic desire would assess the situation differently:  “I tried my best and can feel good about my performance.  I will learn from this experience and improve in the future.”

A person with perfectionistic demands hates failure of any type.  They will often avoid challenge that they determine as too difficult rather than take the chance of failing.  When my son competed in chess tournaments, he preferred to draw an expert or master level chess player as an opponent even though he was likely to lose to them.  When I asked him why, he said he could learn more losing to them than winning against someone at his own level.  I not only learned how smart my teenage son was but I realized this was a very important life strategy.  Seek out people who are better than you and learn from them.  Don’t dread a better opponent.  See it as an opportunity to learn and improve.  In the martial arts I’ve often heard of people who remain at the brown belt level rather than be promoted to black belt because then they can win at tournaments.  These people are losing the big picture.  They are making winning more important than learning.  Therefore, they will never be true champions.

Performance Enhancement in the Martial Arts: A Review

By Monica A. Frank, clinical psychologist and founder of Behavioral Consultants.

INTRODUCTION
Although sports psychology is still in its infancy, a tremendous amount of interest has been generated by the potential of psychological principles to enhance athletic performance. In particular, the dedication to empirical examination of the tenets of cognitive-behavioral theory has led to more effective clinical techniques which have been intuitively appealing to sport psychology consultants. As a result, psychological methods were implemented to enhance performance prior to solid research support. However, recent reviews of studies conducted in the last approximately fifteen years have shown the psychological methods to be useful in the area of sports performance enhancement (Greenspan & Feltz, 1989; Weinberg and Comar, 1994).

Much of the research in this area has focused on individual sports or individual skills for team sports as that allows for better experimental designs. As the research base has grown, it has become possible to select particular sports, especially those that are individually based, and examine the literature for the factors that influence performance. A number of studies have specifically focused on enhancing performance in the martial arts as the martial arts are conducive to empirical study given their nature and the reasons that individuals participate in the martial arts. Columbus and Rice (1998) examined written descriptions of reasons individuals participate in martial arts and found four themes:

Several of these themes involve a desire for life enhancement likely due to the view of the martial arts as a way of life rather than simply a sport. Many of the mental skills strategies used in sports psychology have been found to be effective in achieving peak performance throughout life’s experiences (Orlick, 2000). These strategies have frequently been used in the martial arts but may not have always been systematically taught.

For instance, Rodney Hard (1983) wrote a sparring principles manual based on methods taught to him by Joe Lewis, the World Karate Champion. He indicated that there were three stages of development to compete effectively in tournaments:

The most important psychological skill according to Hard (1983) is focus, which he refers to as external focus. Generally, any internal focus on negative thoughts, future thinking, or fear will create anxiety and lack of confidence, which will interfere with competition performance. When an individual is externally focused, confidence and determination is more apparent and the individual’s movements flow without anticipation or conscious decision-making. The performance in the ring becomes automatic and focused on the present moment. The karate fighter is not focused on ego or self, but on perfecting skill and is detached from the outcome.

Naginata
Weapons
The naginata is a weapon made from 1.8m to 2.8m of hard wood, at the end of which is a blade about 30cm long and as sharp as a sword. In some cases, the blade could be from 60cm to over 90cm long. The...
Read More 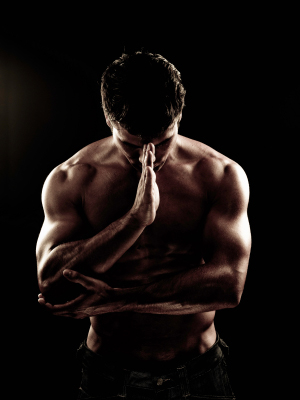 Methods Of Qigong In Kung Fu Training
Training and Technique
By Alexander Popov Qigong is a general name for the systems of hardening and improvement of body and mind, treatment and health enhancement created in China. They primarily based on the ability to con...
Read More
Coping with Pain: The Yoga Way.
Yoga
Physical Pain is perhaps the toughest thing to manage. When it strikes, it seems to tear us apart completely and nothing really helps us in overcoming it. Pain may happen due to temporary or chronic c...
Read More