Dojo Kun - literal translation means "training hall rules". There are five main rules that serve as guiding principles for all who train in the dojo. Although they are usually listed in a set order, no one rule is more important than any other. To emphasise this all five are prefixed with hitotsu and end with koto, which together means "one point".

I urge you to research the meaning of the dojo kun and to draw your own conclusions as to the true meaning of each rule (start here at Wikipedia). Then, once you've done that, set upon Gichin Funakoshi's 20 Precepts (Niju Kun) and see what you make of them.

Here's my take on Endeavour. Obvious first question, how does the Japanese phrase "Doryoku no seishin o yashinau" convert to a single word in English (Endeavour) when the literal translation comes out as, "Effort to cultivate a spirit of ...." Next question, what is the meaning of the word Endeavour, in English? It means this: "to exert oneself to do or effect something; to make an effort; to strive"

We must constantly endeavour if we are to succeed, not only in our studies of karate but in life also. It's the law of causality at play. Cause and effect. Applied effort equals results. We get out what we put in. And that word strive ... sound similar to another of the dojo kun? Instead of Seek Perfection of Character, Strive for Perfection of Character would be equally useful.

Some might say Endeavour means train hard when you are in the dojo, but that's just too simple an explanation. We could use this one rule to tie the other four together. Use the prefix, Endeavour to ... in front of the others: Endeavour to Seek Perfection of Character, Endeavour to Be Faithful, Endeavour to Respect Others and Endeavour to Refrain from Violent Behaviour. It fits in all four instances.

It's important not to mistake the word Endeavour for Try. As Master Yoda said to young Luke Skywalker, "No! Try not. Do, or do not. There is no try." Some say that when we say, "I'll try" we're effectively saying upfront, "I probably won't do this." So my advice to you, in relation to your studies of karate, would be this: Don't say you'll try, say you will, and then just Do It! If you fail, then Do It again.

Which leads us to a very salient point ... Endeavour will likely as not lead to one of two outcomes, Success or Failure. It is often said that we learn more from our failures than we do from our successes. There are some tricks, some simple strategies, for successfully handling failure.

One, always get up one more time than you are knocked down. Two, when you fail, fail magnificently and fail completely. Huh! Translation ... apply to the Endeavour (e.g., karate practice) everything you have, so that you can comfort yourself in the fact that it wasn't a half-hearted effort that leads you to failure, and ensure you complete the circle, don't drag remnants of that failure around with you. Close it off, put it behind you and move on.

How do you inspire yourself to keep going when the going gets too tough? Well known motivator Anthony Robbins uses a challenge that some can find hard to accept. It goes like this, "If you can't, then you must. Because if you must, you'll find a way so you can."

The conscious mind is a very powerful tool, even more so the sub-conscious mind. If we carry our failures over into our next Endeavour (which may be as simple as re-executing a technique in line work, or correctly completing a kata) our sub-conscious mind will focus on the failure and give us more of the same. Check out the science behind the power of the sub-conscious mind for yourself (I may see fit to expand on this point in other upcoming posts). Your subconscious mind is yours to use for your benefit. Far too many of us allow it to control us, negatively. It is there to do your bidding, to serve your needs.

How we talk to ourselves internally, our monkey-mind chatter is hugely important. Which of the following two phrases is the most powerful! "I want to succeed" or "I do not want to fail?" The second appears to be fairly innocuous, but is very powerful because our sub-conscious minds drop out the word "not" and focuses on the positive aspects of the sentence, "I do want to fail." This isn't mumbo-jumbo, there's a whole science surrounding this called Neuro-Linguistic Programming (NLP). There's an old song called "Accentuate the Positive, Eliminate the Negative", which is good advice for how we construct the sentences we use when we talk to ourselves.

So, after all is said and done, this rule — Endeavour — is best done rather than said. We can talk about the meaning of Endeavour ad infinitum if you wish, but it probably makes more sense to follow the advice of a major sporting goods manufacturer, "Just Do It!"

Lies
Martial Arts
I was away working on a New Zealand Ministry of Health project. I had checked into World Wide Backpackers hostel on the Terrace, in the heart of Wellington, for 2 weeks. On the weekend of the rugby 7’...
Read More 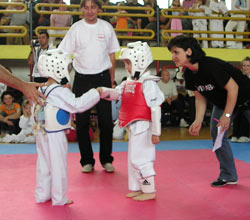 Martial Arts is Great for Kids!
Getting Started
By Steve Doss Admit it. When the going gets tough at home, we've all plopped the kids in front of the television and breathed a sigh of relief. Finally, we can get started on dinner, maybe check email...
Read More

Jo
Weapons
The Jo or the short stick The history of the short stick or jo is allied to one of the most moving stories concerning the martial arts. There was once a samurai called Muso Gonnosuke. He was a very fa...
Read More