When it did kick off often my reaction was almost Pavlovian with the only thought on my mind being the fact that drunken violence had taken place which needed to be curtailed quickly before it got out of control. Often I never really felt the effects of the adrenaline until after the incident has been resolved. The main objective in this type of response was to close the distance, trap and immobilize the arms and remove the aggressor as quickly as possible. Combative skills never came into play working the doors although they had a psychological value by creating an aura of intimidation and deterrent. The only martial art type skills of use in the profession, in my opinion, would be arm-bars, shoulder locks, choke holds and maybe wrist locks.

Competing in martial arts the adrenaline and anxiety effect is quite different to dealing with sudden violence in real situations, even different to hard full-contact club training. It feels a bit like the fear of public speaking mixed with the adrenaline of sport fighting. Although the danger is nowhere near as great as dealing with violence on the doors I find there is the steady feeling of anxiety throughout the day of the competition which reaches a crescendo as you prepare to fight.

Competing you are faced with a long wait watching others as you wait your turn to step onto the mats alone, rather than with colleagues backing you up when a sudden incident occurs. Anxiety starts to build up and the mind start to play its tricks going over the “what ifs” and visualizing worst case scenarios. Worrying about what may happen is a misuse of the human imagination. The strength comes in having control of one’s mental attitude and having confidence in one’s skills.

Only challenge and the self-motivation to engage the challenge produces the mental strength and confidence to grow. I dread the thought of being a martial artist who trains but seeks comfort and never wants to truly challenge himself. Having competed over the weekend in a full contact tournament it feels refreshing and energizing to have run through the waterfall of fear and to have successfully tested my skills. The self-motivation to run towards my fears puts me in a better position to shift my inspiration to my students, to observe their strength and offer support and encouragement.

Demonstrations
Martial Arts
It's that time again, when for some reason I feel compelled to expose the inner workings of my mind (such as it is) to my audience (such as it is). Youtube - you've all done it, don't pretend you have...
Read More 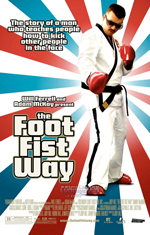 The Foot Fist Way
Movies
2006 Starring: Danny McBride, Ben Best, Jody Hill, Carlos Lopez and Spencer Moreno Small town Tae Kwon Do instructor Fred Simmons relishes the power that comes from being the king of a small kingdom. ...
Read More
Fear Control
Personal Blogs
As rookie bouncer learning the ropes I used to observe how quickly and explosively the head doorman would grab and eject someone as I helped or watched his back. Rapid response and most importantly te...
Read More

I came across this blog while surfing the net. I thought it was worth re-publishing here. For more info go to http://timbrucejiujitsu.blogspot.com